Well we went back. Last May while driving back from Utah towards Nebraska with a majority of the drive through Wyoming, we decided to stop and take a gander. Neither of us had spent much time in Wyoming so we thought what the heck. This little hidden gem we found easily became one of the highlights of our Utah trip… go figure. And then on our way to back out to Utah for our Living Unbound Adventure Workshop we thought why not stop again and this time let’s take the parents!!! So that’s exactly what we did!

And John’s sister drove up from Denver and decided to meet us as well!

Rolling into Alcova, we did the same things we did before. Stopped at the busy, busy connivence store on the corner, got flies, loaded up on ice, fueled up on some delicious ice cream and headed toward the canyon to snag our camp spot! We rolled in on a Friday evening during prime camping season.. we were a little worried about the space! Again, you are camping on BLM land so there’s no reservations, no bathrooms or running water.. but the solitude and views make it prime camping area!

After our 11 mile windy drive to the canyon rim, we roll up to entirely empty land. I’m talking.. no cars are even parked at the trail heads for an evening fish. We lucked out. And we had our pick of campsites!!! How could it get any better!

So we drove through a few of the rough roads that lead you closer to the rim checking out which one we wanted to claim and decided one of the spots we slept at the last time! This one was out of the Wyoming wind and had a beautiful view down the canyon.

We unpacked the car, set up a little kitchen area, Lauri set up her glamping site.. toilet stall, chandelier, air mattress & all. And most importantly Bear approved. The only thing he was missing was the A/C. And now we were ready for the weekend! As the sun began to set and the mosquitos began to fade, the stars began emerging from the sky. Last time we were here we had both could evenings so we didn’t get to see them! 360 degree perfect view of the stars with no light pollution for miles. They were absolutely breathtaking. We saw countless shooting stars, watched a few satellites pass over the sky and the milky way glowed brighter and brighter as then evening grew. And the best part is our tent is a full stargazing tent we were able to watch the starts all night if we wanted to!!! After awhile, everyone hit the hay a bit early anxious to get an early fish in!

The next morning we arose before the sunrise and watched the landscape turn from beautiful pinks purples, oranges and greens. Theres just something about watching the world wake up. The boys readied their poles, the ladies readied their snacks and Pearl had readied her legs with a few miles under her belt already! We hopped in the car and drove the rest of the canyon gauging where they wanted to jump in at! As we headed down the road we began to discover all the fisherman. They were fishing West of the canyon where the land begins to valley out and become more like a meadow. The water was pretty high, much higher than when we were there in May so the fishing might be a bit easier here! The boys tested their lines – no luck but it sure was beautiful! After a bit we headed back to camp for a late lunch and to regroup! It was the hottest part of the day and the fish surely wouldn’t be biting! I took a nap, laid on the ground next to the rim listening to the water and wind echo through the canyon. I slept for a good hour! It was amazing. Soon after just baking in the sun, John and I went and jumped in the river. I’m still getting the hang of this polar plunging thing. Its so difficult to do but damn does it feel good after – and this water was COLD! After jumping in we look up and next thing we know Lauri is headed down the canyon trail telling us she’s jumping in too!!

Now that we had our bath we headed back up to camp to see what Paul was up to! The sun began to lower a bit so that most of river was now in shade from the canyon walls. The boys thought they might test their luck again and we headed to another trailhead that lead to a different river entry point. This was actually the spot where most of the rock climbing is in this canyon and the first place that John and I went after discovering this river. Kaleigh and Zach arrived later that evening just before dark! They quickly set up camp, ate some grub and we were all anxious to watch the stars again!! Only instead of being insanely buggy this night, it was insanely windy! So windy that we couldn’t even start a fire to keep us warm! We even had to break out the puffies!! But the stars were still to die for!!!

Morning #2 – I had asked Kaleigh and Zach if I could take their photos because well it was just toooo dang beautiful of an area not to and it helps me out so other couples can see what an adventure couples session or engagement session could look like!! 🙂

After our little photo shoot we decided to pack up and head for the river again! So this canyon is huge! We were camping on one little slice of the river and at different entry points you have different river access! Normally you could just head down the canyon and walk up and down the river, but because the water was so high some places were impassable!

We headed to the spot where Pauly landed his 4 beauties. Prior to that though, miss Pearl decided to go on an hour long adventure who knows where.. so we were a little behind schedule from that ordeal. She finally made her way back though – thank goodness for that cowbell!! We get down into the canyon and I wouldn’t say 5 minutes in Zach has one on his line. Works him for a few minutes and John helps him with the landing. Beautiful fish. Oh yeah.. he dropped it and almost lost it!!! 🤦🏽‍♀️ 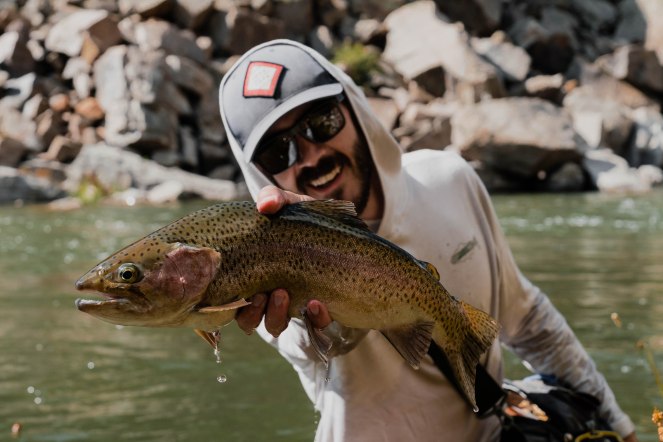 Kaleigh told me later that he Zach was hiding how excited he actually was to catch a fish before both John and Paul. Zach had only been trout fishing for a year now. He came with us to the snake river last summer, bought a pole at the gas station, got his line wet and was instantly hooked. Fished all winter in Colorado and taught himself how to flyfish – pretty cool! And no one else caught a fish that morning.

Again in the heat of the day we headed back to camp, hiked down and jumped in the river! Lauri came again and dunked herself in the chilly chilly water! Kaleigh and I then took a snooze on the most perfect sunbathing rock while the boys attempted to fish again. We headed up the canyon, Kaleigh and Zach packed up their camp – they were headed to meet some other friends for the evening who were camping a few hours away and we decided to get dinner cracking!! We were very anxious to use our Adjust-a-grill we’d just gotten and we couldn’t use it the night before because of the wind! This night we lucked out! We were actually really impressed with the compactness of the grill! In its bag its basically flat!! We set up the grill over the fire pit, let the fire head up the iron, threw on some Iowa bison burgers along with some trout and called it a meal! The adjust-a-grill was actually really simple and easy to use!! And the burgers turned out perfect!! Will definitely be bringing that again!!!

All in all, Wyoming was just as special as it was the first time. Even though the water was high and the fishing was hard, the beauty and solitude of the landscape makes up for it all! Its also a pretty special thing that Lauri and Paul are the type of parents that join their kids on crazy adventures like this. Not many kids can say their mom and dad hike in and out of canyons just to find some trout!

This site uses Akismet to reduce spam. Learn how your comment data is processed.